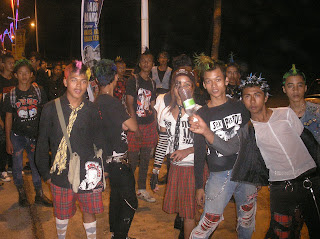 THE Barisan Nasional Government led by Datuk Seri Abdullah Ahmad Badawi should adhere to his Islam Hadhari concept by eradicating social problems in the country, Siti Zailah Mohd Yusof (PAS – Rantau Panjang) said.She said the Government should not just concentrate on physical development, but do more to enhance spiritual development.“The Government should limit the granting of licences for night-clubs and entertainment outlets in the Klang Valley, which have become the places for youths to hang out.“We are also sad over the many divorce cases, mostly involving the Malay community,” she said when debating the mid-term review of the Ninth Malaysia Plan.She added that the Government should do more to enhance the quality of family education programmes because many children have become victims of divorce.Siti Zailah said that at least eight women were reportedly raped daily in the country.“The existing laws, which are weak, should be amended and the country should return to the tenets espoused in the Quran to deter criminal acts.
“What is the use of the Government talking about working to turn Malaysia into a developed country when the crime rate continues to increase,” she added.In a written reply to Nga Kor Ming (DAP - Taiping), Deputy Minister in the Prime Minister’s Department Datuk Mohd Johari Baharom said the Government had allocated a total of RM428mil to build mosques and surau as well as RM8.1mil to build churches and temples.The Government spent RM3.93mil for Hindu temples, RM3.16mil for other temples and RM1.6mil for churches.Such allocation for 2009 and 2010 would be determined by the government later, he said.Since 1991, he said the Prime Minister had allocated RM1mil for physical development of churches and temples and RM1mil for Hindu temples from 2000.